These two names are often interchanged; however, they are entirely different devices with alternative purposes.

Smoke alarms are self-contained, stand-alone, single or interconnected smoke-sensing devices typically found in homes and apartments. They detect smoke and then alarm locally.

Smoke detectors are smoke-sensing devices that are not stand-alone. They operate as part of a distributed fire detection system, typically found in common areas of apartment buildings and commercial premises. Smoke detectors must be connected to a fire indicator panel to operate and are sometimes monitored by the fire brigade.

Smoke alarms in a residential apartment; while being one of the simplest fire protection devices available, is also one of the most important. It is the first line of defence against a fire within your apartment.   It is designed to detect smoke, alarm locally to wake & get you to evacuate your apartment.  A working smoke alarm gives you a 56% greater chance of surviving a house fire according to Fire & Rescue NSW.

The additional reason for smoke alarms usually being stand-alone within apartments is to minimise false alarms impacting all other building residents.  One could expect ‘boy who cried wolf’ syndrome to set in if we were evacuated every time someone burnt toast in their apartment.

Smoke alarms come in various different types and power systems.  The type of power-system is general required by your building’s compliance requirements; whereas the type is your choice, governed by use. The typical types are photo-electric or ionization.  For apartment use, photo-optical is generally the recommended type as it false-alarms less and detects smouldering fires (the killers in homes) best.

Read more about why it’s important that smoke alarms be replaced every 10 years here. We’ll write about why in a future blog. 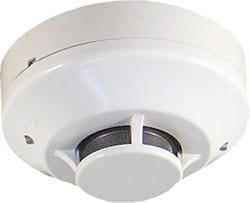 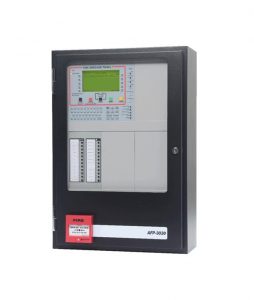 Smoke detectors are not stand-alone an must be connected to a fire panel (see pic above).  The logic programmed into the fire panel determines what occurs when the smoke detector – detects smoke.  It may also determine the sensitivity, time delay, style of smoke detection, or have algorithms to avoid known false alarms.

Smoke detectors are usually found in common areas of residential and in almost every part of commercial, government, education, health-care and industrial buildings.   Their purpose is to detect smoke to evacuate all occupants quickly & activate other fire protection systems.

The Fire panel may take the detection of smoke and operate evacuation and warning systems throughout or locally within the building, it may close doors, start or stop fans, operate strobes, alert the fire brigade and many more possible functions.

Smoke detectors are generally proprietary and therefore matched to the fire panel.  They can be of many different types and are usually very specific requirements for their spacing – e.g. typical spacing is no more than 5 metres from walls & 10 metres between detectors.  That’s a lot of detectors!

Smoke detectors and smoke alarms both detect smoke, but their purpose and operation are quite different.  The level of knowledge and experience required to install and service smoke detection is much higher than for smoke alarms, but doesn’t mean you shouldn’t place the same level of importance on both types.

Contact the team at 2020 Fire Protection for honest, transparent advice on your smoke alarms or smoke detection system.